I want to be a godly woman, a woman whose life has been visibly impacted by the gospel message. This type of life brings glory to God, and that is a Christian’s purpose.

I want that for your life as well.

Ok, whoa. Time out. Let’s stop here. This sounds great and all, but what does it mean? HOW do we live godly lives? It’s great to want to, but how do we live it out?

We’ll look to God’s word for examples.  Queen Esther, a Jew who became a queen of Persia, showed herself to be a godly woman many times throughout her story in the book of Esther in the Old Testament. 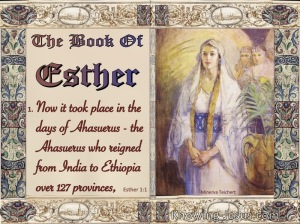 God gifted Esther with a personality and beauty that won her favor with many people she met in her life including the King of Persia, who “loved her more than all the women, and she won grace and favor in his sight…so that he set the royal crown on her head and made her queen…” (excerpts from Esther 2:17, ESV)

Even more impressive than being able to make the king fall in love with her, was Esther’s faith in God. Her faith propelled her to act on behalf of her people when her uncle Mordecai discovered a plot against them. When Mordecai uncovered the plot, he shared that knowledge with Esther, asking her to go to the king and beg him to help the Jews.

Truthfully, Esther was fearful at first.  She knew that taking matters into her own hands and speaking to the king before he called for her company would mean certain death.  (There was a law that said no one, not even the king’s wives, could go to the king unless he summonsed them).  She initially told her uncle she couldn’t help.  However, he reminded her to trust in God’s providential timing and to fulfill her personal calling.  In Esther 4:14b, Mordecai points out to Esther, although indirectly, that God made wife to the king of Persia during a very specific time and for a definite reason – so He could save His children, the Jews, through her. 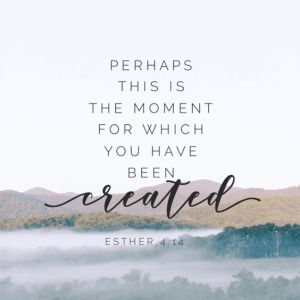 Esther showed herself to be a godly woman in her response to the request from her uncle.  She chose to trust God’s will for her life and to take courage and do what was right for God’s people.  She said, “Go, gather all the Jews to be found in Susa, and hold a fast on my behalf, and do not eat and drink for three days, nights or day.  I and my young women will also fast as you do.  Then, I will go to the king, though it is against the law, and if I perish, I perish.”

Basically, she said, “Bring it on. I trust God’s will for my life and His timing.  I choose to bloom where I’m planted.”

But seriously, this is what we learn from Esther about how to be godly women: godly women submit to God’s will for their lives, like Jesus’ mother Mary did.  They also trust God’s providence and His timing, and they are willing to work for God’s kingdom in their places of influence.

Godly women yield to what God has planned for us. We say yes to where He leads us. We allow Him to carry out His will through our lives. We are productive for the Kingdom in the places God puts us. Submitting to God involves trust in who God is. It involves confidence that He is sovereign and good and just. Again, this sounds good, but how exactly do we get to this point? Pray. Ask God to help us do this. Ask God to have his way in our lives. (Then be ready to yield when He directs you). Listen. How does God respond to your request? Where does He say to go? What does He say to do? Read. Go to scripture and read about other godly women for more examples of holy living. Talk. Seek out women who are leading godly lives. Consider why you think they’re godly? What about their lives leads you to believe they are living a life pleasing to God? What behaviors do they model? Ask them to describe times in their lives when God has required them to submit. Find out what obedience to God looks like and feels like in their experiences. Respond.  Do what God directs you to do.  Live the way He has told you to live.  Turn away from the things He tells you to turn away from.  Be productive for the Kingdom of God in your places of influence. 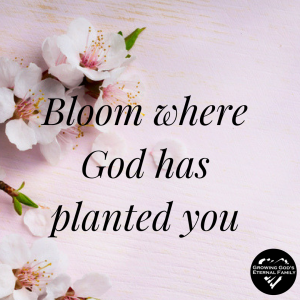 This isn’t something that will happen in a day or two. This will take repeated time alone with God in prayer and in reading His word. This will mean praying daily for God to help you submit to His will…even after you think you’ve submitted, pray each day that God will help you submit to Him that particular day. I passionately encourage you to pursue a deeper relationship with God in this way.  Submit to His will for your life.  Adorn the gospel with your behavior.  Let the world see how your faith has impacted your life.  Be joyful and act on what is right in the places He has put you. Guided Prayer: Father, Thank you for sending your Son to die for me. Thank you for making a way for me to have eternal life with you. Thank you for pursuing me and for bringing me to yourself. I want people to see that your sacrifice has impacted my life. I want people to see that you have changed me. I am your servant girl, Lord. I believe that you have me in this place at this time for a purpose.  You created me for this.  You have shown me that I can trust you. I want to submit my life to you, Lord. I don’t know what that looks like, but you do. I don’t know how to do it, but you do. Help me to do it, Lord. Help me to yield my plans and my agenda and my schedule and my to-do list to you. Make me humbly obedient. Make me your servant girl every day of my life. Amen

Thoughts – Does it say that in the Bible?  See – https://www.thegospelcoalition.org/article/biblical-say-bloom-youre-planted/