Being a Christian who lives in the world but isn’t conformed to it isn’t the easiest job I’ve ever had.  I’m sad to say that I have conformed to the world and what it says is right.  Thankfully, I turned to God again and let Him and His Word renew my mind. 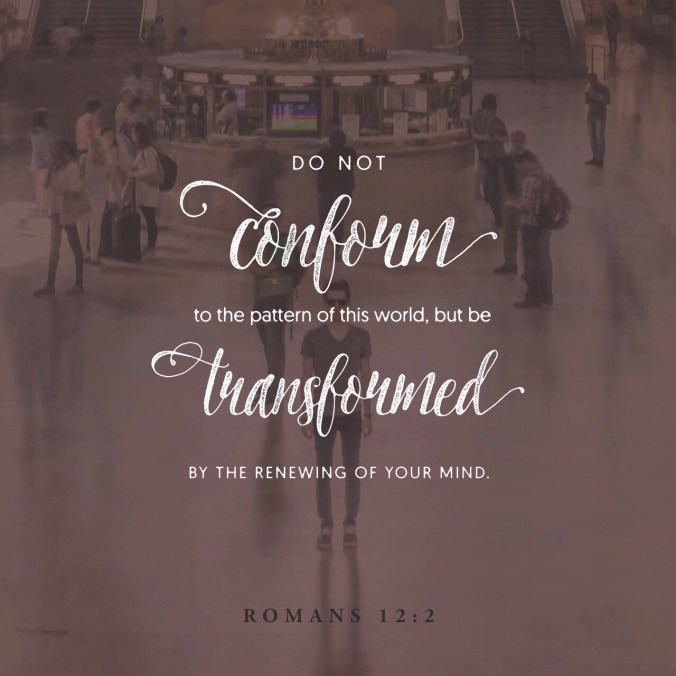 Satan is crafty, isn’t he?  He knows how to make sin look good.  Fun.  Exciting.  He knows how to twist things around.  He knows our weaknesses.  He has been allowed some power in the world.  Don’t believe me?  Look around.  Read the newspaper.  Watch the evening news.  Walk through the mall.

But the world can’t have me anymore.  I have made Jesus the Lord of my life.  I have given control to Him.  I see the world through Christ-centered lenses now.

I know that I am not home here, and I won’t be conformed to it or by it anymore.  Not with Jesus in my heart and His Word in my hand. 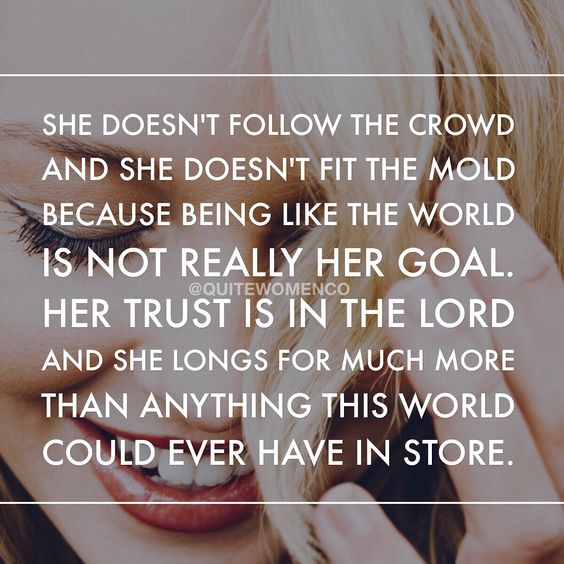 I am alone. It’s calm and quiet in the house. I’m standing still in the middle of the room. Yet my brain is swirling and my pulse is quickening and my eyes are widening.

What’s going on? I ask myself.

Whatever it is started small but quickly escalated to the point that my head might explode.

I quickly retrace my steps.

OK. I now I know what’s going on, and I know how to stop it.

I breathe. I speak Jesus’ name. I ask Him to remind me of the promises He made – that He loves me. That He will never leave me. That I can trust Him with all my problems and fears.

The thoughts racing around my brain begin to slow. My heart beats calms, and the muscles around my forehead and eyes relax.

I sit down and actually write out the to-do list. Calmly. Then I get up and move on with my day.

It took a while to realize what was happening when I worked myself into this frenzy. I don’t know how long I’ve dealt with it although I probably accepted the experience as a normal part of my life at some point.

I realize the lie now, and I know what to do.

It was sometime in the last year that I really caught myself getting into this fixation over my daily tasks and analyzed where it was coming from.

This particular morning, it was barely 6 AM on a quiet, week-day morning in June, but I had already working myself into that familiar frenzy.

I began thinking of all I had to do and comparing it to the {perceived} available time in my day and convinced myself that I didn’t have time to do what I needed to do.

Before I knew it, I was standing still in the middle of the room but feeling pulled in 100 different directions.

Worrying over not being able to get everything done was keeping me from getting anything done!

On a previous such occasion, in the throes of that fray, God revealed to me that the frenzy and hopelessness I felt originated with Satan. God also showed me that I allowed it to continue to happen to me.

I allowed this pattern to emerge, for the father of lies to get this grip on my mind. But the truth is, he probably doesn’t have to do much anymore to get me going. He’s on auto pilot with me now. I do it for him.

I render myself useless.

Nothing will get checked off my list if I’m already telling myself that I don’t have time to check things off my list.

So, I told him to get away. I literally said, “get behind me, saying, in the name of the Lord Jesus Christ. ”

Instantly, the weight clinched around my heart dropped away, the smog filling my head cleared, and I calmed down. Since that episode, I’ve gotten better and better at recognizing his schemes and banishing them faster each time. Just like I did that morning this past June.

In moments of weakness, I still let him get started on me. I begin listing my tasks and looking at the clock. Then the dread starts in my chest and tries to creep up my neck to make me clench my teeth.

Then I realize I’ve stepped too near the quicksand again, and I move before I get sucked down. Thankfully God revealed this lie to me. He revealed the scheme and made it clear that I played a role in perpetuating it.

Now, I can usually stop myself before it goes too far.

If there really is a lot to accomplish, I take a minute to write out all I need to do. Next I note the “due date” for each task. This helps me prioritize and get a clear picture of what needs my attention now and what can wait.

Then I get started.

It’s all a distraction, you see. Something to make me take my eyes off what’s really important. Just like last weekend when Satan tried to distract me from hearing God speak to me at a women’s retreat.

It’s the same with my to-do list. If the liar can get me bogged down in the list, I get frustrated. Frustration leads to anxiousness, and I’ll drown. I’ll be angry that I have too much to do and not enough time, and I’ll shake my fist and become angry at God. Meanwhile, Satan, the one who’s actually to blame, can sneak off while my back is turned and pounce on someone else and infect someone else’s mind with his lies.

I don’t want that to happen – to me or anyone else.

So, we have to talk with God. We have to listen to Him. We have to read His Word. We have to surround ourselves with other people who love Him and can point us toward His Truth.

And we have to do it now – the sooner the better.

It happened because I chose the wrong shirt size.  I probably shoulda gotten a medium, but I got a small.  It fit fine over my arms, shoulders, and chest, but I’m a pear shape, so it was a little snug over my rear end and my hips.

This was over the weekend at the Be Still Mama women’s retreat I attended at The Cove in Asheville.  (This was my second Be Still Mama retreat at The Cove.  If you’ve never been to The Cove, you absolutely HAVE to go).

When we arrived Friday, the 70 participants changed into our retreat t-shirts and took a group picture.

“Mine is a little big,” one of the ladies commented after we put on our shirts.  The sleeves, meant to be three-quarter length and fitted, were longer and hung loosely.  The body of the shirt itself fell over her petite torso and covered her backside.  It looked comfortable but oversized.

“What size did you get?”  I inquired.

“Medium,” was her reply.

“Oh!” I said, a little surprised.  “You should have gotten a small.”

“No way,” she responded.  “It would have been way too tight and clingy all over my stomach.”

I was silent.  Here stood this lady clearly more petite than me saying she wouldn’t order a small shirt because it would be too clingy…while I stood there in a size small shirt that I repeatedly tugged over my rear end and hips.

All of a sudden, it hit me like a hot wave…those old, familiar feelings of inferiority and self-consciousness.

Before I knew it, my mind was racing…

“You shouldn’t be here.”

“That shirt is too little!  What made you think you could fit into a small?!”

“Your face is breaking out, too,”

“Can’t you do anything with that crazy, curly hair!?”

And I just wanted to shut myself in my room for the rest of the weekend.

I didn’t want anyone to see the shirt stretched over my hips or the acne on my face or the frizz on my head.

I didn’t want to be there anymore.

But, I went to dinner and to our first session that evening.  I sang the praise and worship songs and turned to 1 Kings 17 in my Bible.  Afterward, I went back to my cabin and hid in my room for a little while – fiddling with the stuff in my suitcase and taking off my make-up and brushing my teeth and putting on my pajamas. Finally, I made myself go to the den to talk with my cabin-mates.

The whole time, the inferiority and self-consciousness was still there – feeding itself on my weakened spirit.

The next morning, I woke up after a sound night’s sleep and puzzled for a little while.

“What was that all about last night?”  I wondered.

After all, nobody had said anything directly to me.  The lady had only made a comment about her own shirt.

Then, I realized it!  That was Satan.  He did that.  He brought up all those negative thoughts and insecurities.

I could have done a forehead-slap!  Why didn’t I realize it was him as soon as it started?

And why in the world was he after me anyway?

Oh…duh!  (another forehead-slap moment) I was at a Christian women’s retreat!

Of course it was a plan to distract me.  If Satan could distract me by getting me all wrapped up in self-consciousness, I would miss the message God had for me.

I stood right there in the middle of the bathroom where I’d been washing my face when I had my epiphany, and I said, “that’s enough!  I’m not doing this today.  I came here to spend some quiet, relaxing time with Jesus, and that’s what I’m going to do!”

Any time I even thought those feelings might come back at any point over the weekend, I reminded myself:

Those thoughts are from Satan.  He wants to distract me this weekend, but he isn’t going to win.  Jesus is with me, and He has something to say to me that I want to hear.

And I went on with my day!

Honestly, that kind of thing has happened to me a lot in my life.  I’ve only recently been aware of what is really going on – a spiritual attack – and been able to combat it by praying and asking God to intervene for me.

I imagine this has happened to you before, too.  Hopefully, you realized what was going on and put a stop to it before you got sucked too far down in the muck.

Recognize the attack and the attacker and immediately resist it with prayer, by calling on Jesus name, or by rebuking Satan and letting him know he has no place in your mind and in your heart.

Don’t let him ruin one more beautiful moment of your life.