Author’s Note: Ethan and Emery are in school, and I have been at my new job for a few weeks now (will blog about that soon since I addressed it in an earlier post). So, I am taking a short break from writing new posts this month so I can focus on time with the kids and getting used to the new job.  In the meantime, I am reposting pieces of my testimony that were published when I started the blog in October 2017).

It was a gradual thing: me turning my back on God and deciding Jesus never existed.  It was gradual, but it eventually held fast.  My heart became stone.

Just as gradual was me turning back TO God.

He had been working on me persistently since about 2005, and He really stepped it up when He called me to leave my full-time job to stay at home with our son.  Through a series of events, He kept wooing me closer – slowly but steadily.  He had me in a group of Christian moms who met in a MOPS group sponsored by our church.

I was searching – this time for Jesus.  I really wanted Him to be real to me again.  When I read things in the Bible that He’d done, I wanted to KNOW for sure that those things had actually happened.

I wanted to KNOW that His feet had taken Him to sit by the well where He talked with the woman from Samaria (John 4:4-26).

I wanted to BELIEVE that He actually wore the cloak that the woman in the crowd touched.  She’d been afflicted for nearly 12 years and had found no relief.  However, she heard that Jesus was coming and believed that just touching His clothes would heal her (Luke 8:43-48).

After about a year, the MOPS group dissolved into a Women’s Bible study.  I moved on to that with some of the mom-friends I had from MOPS.  I was very excited!  I was ready to be pushed and challenged and really dig into the Word.  It was time!  God was stirring. He had been working on my stone heart; it was softer now and ready to be fed.

I dove head-first into the first Bible study, Living Your Life as a Beautiful Offering, by Angela Thomas.  In this study, Thomas uses the Sermon on the Mount to show how to give our lives as an offering to God.

I prayed.  I read the study and my Bible.  I wrote in my journal – things I felt, prayers to God, and what I learned from reading the scripture.

God began to speak to me – through the study and through sermons at church.  I had never been convicted by a sermon in my life!

Our preacher, Mike Whitson, talked one Sunday about how a Christian should show God’s love.  We should love other people simply because they are God’s child, not because they are lovable.  I realized I didn’t love people unless I wanted to.  During the invitation, the preacher called for people to come to the altar, and I practically RAN down there!  It was one of the few times in my life that I have voluntarily gone to the altar.  I begged God to help me love people because I didn’t.  I asked Him to break my heart and make me love people the way He did.

About the same time, Preacher Mike gave another sermon about the Christian life producing fruit because of the Christian’s relationship with God.  I didn’t have anything like that in my life.  I could say I was saved when I was 12, but now I was in my mid-30’s and had nothing to show for it.

And, all of a sudden, He DID!  Jesus was there, and He was REAL!  The process God used to get me to that point was gradual, but He was working on me and softening my heart. When I finally realized it, it seemed like everything was just…“POOF”…fixed…after praying and begging and reading and journaling.

HE WAS REAL AGAIN!

When I read things in the Bible that He’d done and said I saw them and heard them and believed them.

The Angela Thomas study showed me that I did a crucial thing – I turned back towards Jesus.  That’s all He wanted.  He wanted me to ask.  He waited for me to give Him permission to take over my life and heart.  I didn’t need to do anything to fix myself or make myself believe in Jesus again…except turn my face back towards Him.  He did the rest.

Thomas used the story of the prodigal son to illustrate this concept.  She described how the prodigal realized the error of his ways and set out for home to ask his father’s forgiveness and to ask him for a job.  The story says, however, that when the father saw the son, way off in the distance, coming back toward home, the father RAN to meet the son.  The father was so excited that his wayward child was coming home that he didn’t wait on his child to get to him…he RAN out to meet his son.

Thomas explained that this is how it is with God – you simply have to turn towards Him and He will run to you.  This is exactly what happened to me.  He saw me turn towards Him.  He knew my heart, that I wanted Him, and HE RAN TO ME! 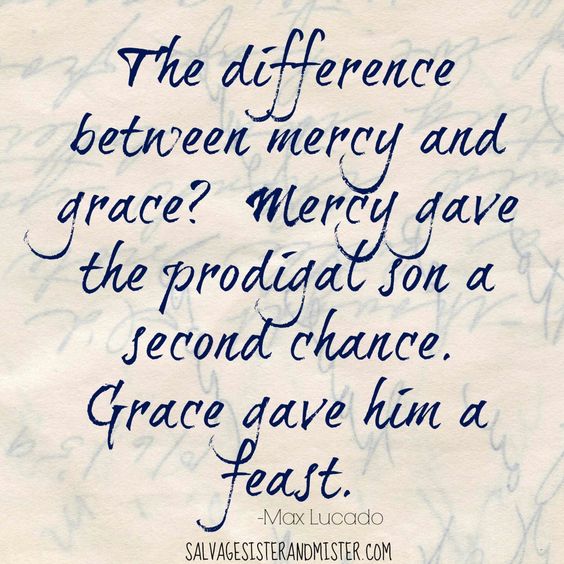 He healed my damaged mind.

He softened my heart to allow Himself back in…and I believe!